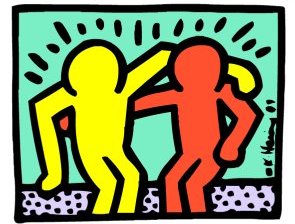 In an ideal world, everyone would be in a constant state of being a mentor and having a mentor (or being a mentee, if you prefer). In the past few years I have been part of formal and informal mentoring relationships with some people who have helped me find out all sorts of things about myself. I want everyone to experience it first-hand because I have found it to be transformative.

I sought my first mentor as I was trying to make sense of moving to a big city and changing career into my first real 9 to 5, office-based job from a short-lived career in youthwork. I went looking as I had a gut feeling that my line manager did not know how to manage my area (or me) properly because it was a new area for her. I was often left feeling that I didn’t know what to do, which was damaging my confidence.

I signed up for a local scheme which paired me up with the Business Development Manager of a charity near to the office where I worked. There were some areas of crossover in our work. Before our first meeting I felt nervous and excited. We arranged to meet at a mutually convenient coffee shop. My first impressions were not great. He seemed to be pretty grumpy, unimpressed by the lack of depth to my footballing knowledge and he was trying much less hard than I was to be liked. I was highly surprised when he said, “So, when would you like to meet next?”.

We arranged to meet up on a monthly basis after that and I can honestly say that the six months that followed saw some of the most personal and professional development I have ever experienced. What he taught me were some of the most valuable lessons that anyone can pick up at work.

By presenting my line-manager with some ideas that I knew were part of the role but had never been fully completed, I was able to pick out some quick wins and make a good impression – convincing her that she was doing a great job of managing me.

Whilst my line-manager didn’t quite get my area of work, she was smart enough to recognise where good work was being done and just encouraged me to do more of it. I kept on relentlessly taking responsibility and giving away credit to allow myself to keep doing more of the work I loved.

This wasn’t something he told me, more that he demonstrated through the way that he shared his experiences and introduced me to people he worked with and what they do. He was admired and respected, his work had won national awards yet he was completely himself and down to earth.

We continued to meet up for three years, during which time I went through two promotions at work. It coincided with a time of feeling that I was doing exactly the right job at the right time in the right way. Those feelings are hard to maintain forever. As my work dynamic changed and he got a new job, it felt like the right time to move on to new challenges.

As part of my new role, I wanted to be able to mentor someone else who was in a similar boat to me. I wanted to get better at coaching, as my new role had some managerial responsibilities, but I also just really wanted to give something back and pass on some of the helpful lessons that I had learned.

I signed up to a scheme which paired me up with a local university student who would be in his second year. As a mentor, I soon realised just how nervous this responsibility would feel. Did I really have any wisdom to share? I felt as much of an impostor as I’d ever felt. Fortunately, my mentee was incredibly easy-going and smart, which took some of the pressure off.

We arranged to meet in a different pub each time we met, allowing us to experience a wide range of drinking holes in North London. He had sought out a mentor as he had no real concept of what he wanted to do after graduation. He had a range of options available to him but could not really identify where to begin. I used some of the tools that other people had used with me in the past. Here are some of the things that seemed to work for us:

It helped us both understand what we stood to gain and build some rapport. The beer helped with this, but mainly this openness and understanding set a really good baseline for our relationship.

While it sounds heavy, this just meant we knew how to behave courteously towards one another and would both have a sense of whether we had achieved something after the programme had ended.

This was contrasted with all the things he hated and was bad at, along with some of the things he currently wasn’t great at but wanted to get better. We discussed what sort of roles and sectors would fit within his parameters.

He has done incredibly well during this time, finding work experience at the highest level imaginable in his ideal sector, has networked with some really valuable contacts and has a clear idea of what he wants to do after graduation.
I feel so proud to have been his mentor and am really excited to see where he ends up next. Whilst I hoped to be able to give something back, I had no idea that being a mentor could be so rewarding and encouraging. Everyone should do it!